In the past 7 days, the rally in Cardano has been around 16%. It is relatively less as compared to some of the other cryptocurrencies. Due to this very reason, Cardano (ADA) is not on the radar of investors. However, fundamentally, things are improving at Cardano (ADA). That is why it has been in the news recently. It is trying to set itself apart through various partnerships across different sectors. Before we go any further on the partnerships, it is crucial to understand what Cardano is trying to achieve. It is trying to create an ecosystem in which, transfer of value is possible in a secure fashion. It is trying to make a smart contract platform which will have better features than its peers. The transfer of value is essential to the securities market so that transactions can take place in real time and on a scalable basis. In this regard, it has forged an alliance as well.

How is Cardano setting itself apart?

Instead of diversifying into different directions, the recent partnership by Cardano has been in the same direction. Hence; it is expected that Cardano (ADA) might gain more momentum in the coming days. We will highlight this partnership below and help you understand how it can help Cardano.

Cardano is forging an alliance with Polymath. This alliance aims to create Polymesh. The token Polymesh aims to be the pioneer security token based on the blockchain. Polymesh expects its blockchain and token to become a significant player in the securities market globally. However, Cardano’s Charles Hoskinson is aware of the challenges which lay ahead. He clearly stated that unless the cost intensive nature of the secure tokens is brought down, scalability will be a problem. Also, he dropped a few hints regarding some of the features which we can expect in this token. We mentioned that it might allow you to reverse transactions or freeze transactions. The functionality of reversing or freezing the transactions is not available currently in most of the mainstream cryptocurrencies. That is why it is a definite positive.

In the last couple of weeks, Cardano has made another significant announcement as well. It seems like instead of tapping into the developed countries, Cardano (ADA) is tapping into the developing economies to expand its footprint. Cardano recently announced that it would be partnering with Mongolian Fintech Association and Mongolian blockchain technology and cryptocurrency Association. It will be developing an advanced technology which will help these organizations curb the sale of adulterated drugs. Adulterated drugs are a big problem in Mongolia. That is why this partnership can indeed help Cardano resolve this real-world problem. It will also induce more credibility into the cryptocurrency, which will help it gain more investor attention. It is one of the primary reasons why this partnership is so important. 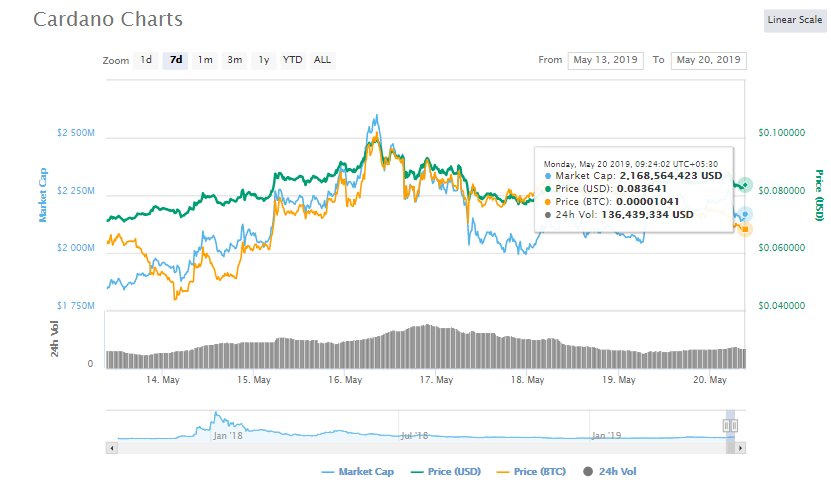 On the face of it, it would seem like the 15% rally in Cardano (ADA) in the past 7 days is pretty good enough. However, when you compare it to other mainstream cryptocurrencies, you will realize that it is underperforming other cryptocurrencies. One of the basic reasons for this is the lack of rise in volumes. They have remained around $ 12 million for the past 7 days. There were impulses in between but broadly speaking; they have remained around these levels. With such strides in fundamental use of the blockchain, the volumes can increase shortly as well.

In both these cases, Cardano is trying to solve real-world problems. The advantage in doing so is that it not only gains credibility, but the applications of the blockchain can increase significantly as well, which will, in turn, benefit Cardano in more ways than one.