Most cryptocurrencies are consolidating currently. They are down by 5% to 6% from their peaks. When you look at the intraday performance of Ethereum today, it is down by 3.61%. It is trading around $ 246.92. The exciting thing here is that the rally in the past one month has seen increasing volumes consistently. If you have been monitoring this fall, you will realize that it has also come on higher volumes. The question is whether it can indicate anything. The volumes are often an additional indicator which many traders and investors use to gauge the momentum and the credibility of the move. That is why today, we will try to analyze the volume as well as the price movement of Ethereum (ETH) to understand more.

Ethereum is falling on substantial volumes; what does it indicate?:

In the past one month, Ethereum (ETH) has moved from $ 173.75 to $ 246.21. It has risen by approximately 43% in just one month. It is usual for it to take a breather after a sustained rally. In the same period, the volume has increased from $ 6.1 billion to $ 10.6 billion. At the peak, it even touched the market cap of $ 18 billion. When you look at the performance of Ethereum in the past 24 hours, it has fallen on substantial volumes of over $ 10 bn. The question which many of the traders are asking is whether it is a big sell-off or just an impulse. 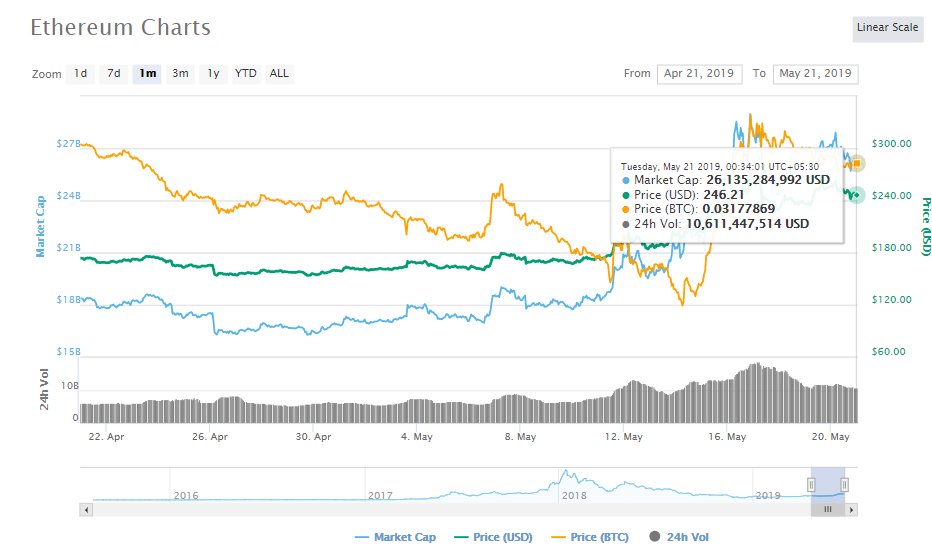 Is Ethereum about to sell-off?

The answer to that depends on the resistance and support levels for Ethereum. The nearest support level is $ 235.86. If it breaks that, there is another support around $ 229.5. It means that unless both of these supports are broken, the big sell-off might not be coming any time soon. On the upper side, the resistance is around $ 262.89. After that, there is resistance around $ 268. It means that on the higher side as well, it cannot move swiftly. It seems like unless any of these levels are broken, the move might not be swift.
You have to also take the move in the context of the cryptocurrency market. Most of the other cryptocurrencies are already consolidating. That is why it seems difficult for Ethereum to break the resistances on the upper side. Also, considering the significant rally in the past month, it may not be able to break the resistances soon.

Owing to this very reason, if you’re expecting a big sell-off in Ethereum (ETH) that might not happen unless both of the support levels are broken. It is a good idea to wait out for the range to break on either side. Only once you enter after the range is broken, you can be sure that the movement will be swift. Till that period, there might only be lackluster movement.