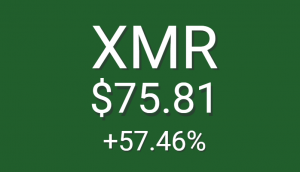 you look at the performance of Monero (XMR) year-to-date, it is up by almost 57%. It has been rising consistently. Currently, it is trading around $ 75.81. One of the primary reasons why it is gaining so much impetus is because it facilitates anonymous transactions. However, according to a recent report, it might be possible to flood the XMR blockchain with transactions to trace the origin of the transactions. If so, it poses a significant risk to the actual user base of Monero. We will today go into the details of this report to help you understand more.

Is it possible to trace Monero transactions?

How much would it cost to trace transactions?

How many transactions can be traced?

Does it pose any risk to Monero (XMR) users?

Many Monero (XMR) users use it only because it provides anonymity. The problem is that this attack makes anonymity vulnerable. You never know when an attack might start which can uncover your transaction. However, the good thing is that now that it is out in the open, the developers will likely work overtime to make the network even more secure. Moreover, since the attack is only possible over a longer duration of time, it is likely that practically, the attack will not happen at all.

While Monero (XMR) might make it susceptible to trace the transactions but in practicality, it is tough. Also, since the Monero (XMR) developers might not work overtime to patch the loophole, it is just a matter of time before the Monero (XMR) network becomes even more secure.

About Riddhi 224 Articles
I am an electronics engineer and follow the crypto space closely.