When you look at the performance of most of the mainstream cryptocurrencies on a year-to-date basis, they have risen handsomely. Many of the mainstream currencies are between 10% to even 100% in 2019. However, when you look at Zcash (ZEC), you will find that the performance has been lackluster. It clearly indicates that Zcash (ZEC) is struggling to gain momentum.

At the start of this year that is on January 1, 2019 Zcash (ZEC) was trading around $ 56.43. Today, it is trading around $ 56.76. Thus, in 2019, it has hardly provided any returns at all. Sure enough, in the interim, it did go to as high as $ 72, but it was not able to sustain at that level. It is once again trading flat when you compare it with the levels of January 1, 2019. Many of the other cryptocurrencies have also come down from the higher levels, but they are still in the green when you take into account the returns on a year-to-date basis. It clearly indicates that Zcash (ZEC) is under enormous pressure.

The volumes in the preceding four months have not picked up either. They have remained more or less at the flat level with interim spikes in between. The reason why ZEC was expected to pick up is that it is one of the most popular private coins. Apart from Monero, it is one of the very few coins which actually provides anonymous transaction if the user wishes to use that feature. That is why, it was expected that with the increase in the use of Monero (XMR), Zcash (ZEC) would gain more momentum as well. However, neither the volumes have increased, nor it has provided any meaningful return in the past few months.

Levels to watch out for: 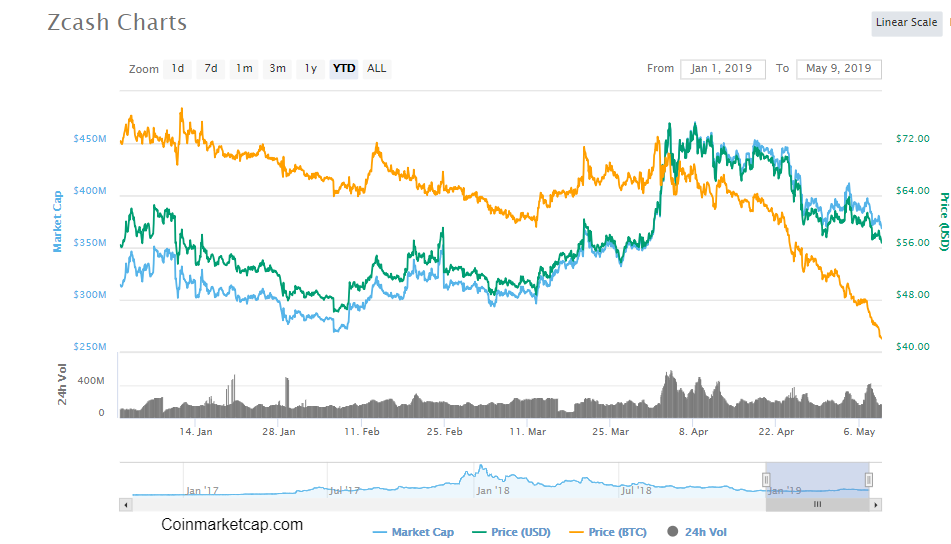 If you’re thinking of investing in Zcash (ZEC), it would be better first to find out whether it can find some support at the lower levels or not. If it continues to break these lower levels, it might be a good idea to wait it out. On the upper side, it will find it very difficult to clear the levels of $ 74.5. If you’re in the green and Zcash (ZEC) struggles around the higher levels, it might be time to think about profit booking.

While the fundamentals remain strong in the private transactions which it provides can gain more users, but in terms of the technical momentum, it is lagging severely.